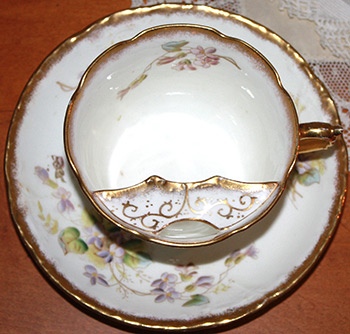 "For some reason I think the moustache cup in the bedroom is very interesting. I always check to make sure it is safe and sound. Having a moustache myself, I like the whole idea.  In the Victorian Era, it was stylish for men to wax their moustaches to keep them kempt and tidy. Unfortunately, the heat from the tea would melt this wax and it would fall into their teacups. This would not be appetizing to drink, so the moustache cup was created. The special lip protects a man’s moustache, so he could safely enjoy his tea without the unpleasant wax."

Moustache Cups were invented in the 1830s by an English potter named Harvey Adams. He created a “moustache guard”, a moustache-shaped ledge that went across the rim of the cup, with a small opening in the middle to sip the tea through. This allowed the gentleman to drink his tea and keep his mustached upper lip dry. Thus, the moustache rested safe and dry.

This item can be found in the Second Guest Bedroom.